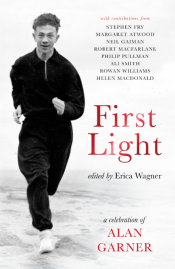 I imagine you’re all heartily sick of my going on about my new book (that is, Late Checkout, out on the 9 June), so I thought, for the first time in a while, I’d post something that has nothing to do with crime fiction.

A few months back, I did my tiny bit to support the publication of a new Unbound book, First Light, a tribute to the writer Alan Garner, edited by Erica Wagner and featuring an extraordinary range of contributions.  Garner’s always occupied a special place in my literary heart, and it’s clear from the book that an awful lot of people feel the same. His books offer something unique in English literature.

Like most Garner enthusiasts, I first came across his early books as a child. His first book, The Weirdstone of Brisingamen, is undoubtedly flawed (he describes it as an ‘apprentice work’) but its power is undeniable. Its successor, The Moon of Gomrath, is even more remarkable—I’d forgotten quite how remarkable until I came to re-read it to my own children, who became lost in the same magic that had gripped me thirty or more years before. Each book after that, up to the most recent Boneland, has demonstrated a continuing progression in skill and ambition which again seems unprecedented in English writers.

First Light is, perhaps against the odds, a worthy tribute. This kind of book is usually a mixed bag of the excellent and the ‘will this do?’ mediocre. But clearly Garner inspires the same excellence in his fans as he demands of his own work. The contributors range from writers clearly influenced by Garner’s work—Neil Gaiman, Philip Pullman—through to those who’ve been sucked into the orbit of Garner’s wider enthusiasms and interests, such as archeologists, astronomers and historians. But, for me, almost every contribution offered a new insight into Garner’s distinctive genius.

I’ll probably write more on here about Garner, because reading First Light has prompted a number of thoughts about his books, but for the moment I’ll just recommend that you get hold of a copy of First Light yourself. If you’re a Garner enthusiast, you’ll want to read it. If you aren’t (yet), the book may well help turn you into one.