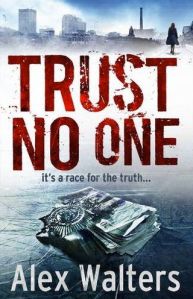 I’ve been a little remiss in not confirming that Trust No One is now firmly in the shops.  As well as the likes of Waterstone’s and your very friendly local independent bookshop, you should also find it prominently displayed in the likes of W H Smith and even Asda, so there’s no excuse for not buying it.  And those of you with Kindles should note that the Kindle edition is currently being promoted at the extraordinary price of 49p, which must be a bargain.

The book’s received a very generous couple of reviews on the It’s a Crime.. and Books and Writers blogs, for which I’m deeply grateful.  And you might (or might not) also be interested to read this piece of the KIller Reads website, which tells you far more than you ever wanted to know about my musical tastes…

Marple is a small town on the edge of the Park District which, accordingly to a probably apocryphal story, provided Agatha Christie with the name of her famous female sleuth.  It also happens to be the place where I live.  Over the last couple of years, the town has established an excellent local festival, covering everything from the arts to food and drink.  This year, I’ve been asked to participate in the festival as part of an evening devoted to crime fiction.  The evening includes an interview with me and the brilliant Chris Simms, who also lives locally, as well as a crime quiz, a play, the results of a short story competition (with Chris and I reading the winning entries), book sales and signing, and no doubt lots more.  There’s even a decently-stocked bar.  The evening’s taking place on 27 September at the Carver Theatre in Marple, and you can find more details (including how to buy tickets) here.  If you happen to be in the area, we’d love to see you there.

Having a new book out has made me think again about the apparently parlous state of book retailing in the UK.  There are a few potentially encouraging signs, such as the arrival of James Daunt at Waterstone’s, but far too many depressing stories like this one in the Daily Telegraph, which details the shrinking of the industry in the face of the supermarkets and the internet.  I can’t claim any great moral high ground here.  My publisher, Avon, operates unashamedly at the commercial end of the market (and, in terms of finding readers, I can’t exactly pretend that I’m sorry about that!) and I buy more than my fair share of books from Amazon.  But I do try to use independent bookshops, including the fine one in the town where I live.

There’s no question, though, that times are tough and getting tougher for independent bookshops, and it’s difficult to see how they can regain the ground being lost.  If such bookshops have a future, they clearly have to provide offerings that are distinct from those of their larger competitor.  They can’t compete with Tesco, Asda or even Amazon on price, and it’s difficult for them to compete with Amazon even on ease of use or availability of stock.  But over the summer I came across a couple of examples of shops which seemed to offer something different.

The first was the excellent bookshop at Salts Mill, at Saltaire near Bradford.  For those who don’t know, Saltaire is a Victorian ‘model village’ originally created by the industrialist Titus Salt.  It’s now a World Heritage Site and well worth a visit. Salts Mill was the original mill, which in the late 1980s was bought by the late entrepreneur, Jonathan Silver, and established as a gallery devoted to Silver’s friend and former schoolmate, the artist David Hockney.  It now houses a terrific collection of Hockney’s paintings, as well as a selection of restaurants and retail outfits.  For various (non-writing) reasons I’ve had some dealings with the Mill over the summer and so had time to explore its offerings.  The whole place is fascinating, but I was particularly struck by the quality of the bookshop.  It has the advantage of occupying a beautiful space in the Mill and it’s very well laid out – a thoroughly enjoyable place to browse.  But the real strength of the shop lies in the range and diversity of its stock.  It has all the items you’d expect – books on Hockney, Saltaire and the local area – but an awful lot, both fiction and non-fiction, that you probably wouldn’t.  The result is that you (or at least I) constantly find yourself thinking: ‘Oh, that looks interesting’ or ‘I’ve read something about that’.  The other result is that you (or at least I) find it impossible to come away without buying something.  And, more importantly, something that I almost certainly wouldn’t have found through Amazon.  Having met the Silver family members who now run the Mill, I can see that it’s a labour of love as well as a commercial enterprise, and that shows through in the bookshop as well as in the rest of their offerings.

The second example is the Bakewell Bookshop in Derbyshire.  I’ve lived on the edges of the Peak District for a large part of my life (discounting aberrant periods in London and Cambridge) but for some reason, despite driving through the town on  regular basis, hadn’t visited Bakewell properly for years.  A couple of weeks ago, I found myself in the town and, intrigued by its website, made my way to the bookshop.  From the outside, it looks pretty much like your typical small-town bookshop.  Inside, though, it has a range of stock which, while clearly tailored to the passing tourist trade, also manages to be intriguing and eclectic. And it’s not just a bookshop – it also sells records and CDs (and, as we know, if there’s one area of retailing in a more parlous state than independent bookshops, it’s independent record stores), a wonderfully disparate mix of folk, blues, country, psychedelia and, in the words of their website, ‘weird stuff we like’.  It was full of items that were either new to me or which I’d never seen in a physical shop, many with neatly hand-written descriptions and recommendations from the owner.  Suffice to say that, between me and my sons, we spent – well, I’m slightly embarrassed to say how much.  More to the point, everything we bought, including CDs bought largely on the owner’s recommendation, was pretty wonderful.  I’m told that his main criterion for stocking items is quite simply whether he likes them himself.  On that basis, I’ll happily trust his judgement when I make a return visit, which won’t be long.  Apart from anything else, I want that Sandy Denny mug.

I don’t know what lessons it’s possible to draw from these two examples.  Both enjoy the big advantage of being situated in locations that attract a passing tourist trade, so they potentially have a more captive market than most bookshops.  But both seem to me to have made a real effort to offer something that can’t be found in Tesco or Amazon – or, for that matter, Waterstone’s at present.  It’ll be interesting to see whether James Daunt can translate the similar virtues of Daunt Books into a high street offering.  If so, I suspect it’s these kinds of bookshops that will provide the model.